A SCARY EXPERIENCE FOR A GRAMPIAN 34 FAMILY 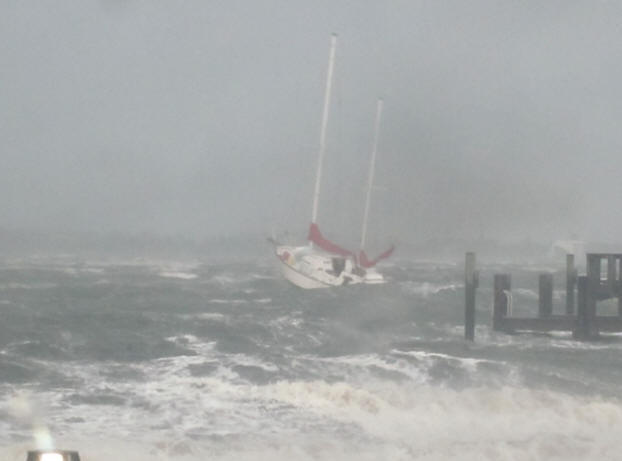 For one Brevard family this past weekend's no-name storm took heading for a safe port in a storm to a whole new level.

Gregory Pace's family calls a sailboat on the Indian River near the Eau Gallie Causeway home.

But when the pounding waves and winds hit Saturday, they began preparations to head to shore.

Included here is a picture of the boat in the storm sent in by a News 13 viewer.

That became a real problem when their skiff they normally use to get ashore broke away and smashed into the nearby rocks.

Pace, his 4 and 11-year-old boys and their mother, Audrea, donned life jackets and jumped into the four to six foot waves to swim the 25 yards to the dock.

He and the 11-year-old made it, but she panicked, holding on to a rope for dear life with the 4-year-old clinging on to her.

Pace jumped back into the treacherous waters and made his way to them.

"He grabbed the front of my jacket, and I leaned back and I don't know if it was a higher power, but I caught a wave of surf all the way to in to the safety buoy," said Pace.

"Very grateful we are all ok," said Audrea Surette.

She was able to swim safely back.

She got a big bruise on her knee during the struggle to stay afloat.

The boys were treated for mild hypothermia.

Overall, their sailboat wasn't damaged, just some banged up appliances and a broken television.

They are hoping for help replacing the skiff.

It shouldn't have been scary though until my wife panicked!

As I was getting on the dinghy the bow came off and we lost that so during a lull I suggested we swim for it, a swim my 11 yr old has made many times in calm water to play with friends. for some reason after me, Stephen(11) and dog hit water, she went back and put shoes on?? Makes swimming a little hard :) but everyone was told plan and repeated back to me twice and a life ring was let out to ten ft from dock to follow.

Yes it was a hard choice to make but granite rocks were less than forty meters downwind and engine is inoperable. Can't see me and kid clawing off under storm sails.

All has been repaired but laptop was under water and skiff got cleaned up before I could measure pieces to make new one. It was a Key West Sponge skiff that could take one heck of a load but rock, paper ,scissors etc..

Feel free to laugh but we now have a ten ft aluminum jon boat.