Dalloway as purchased, before Renovations 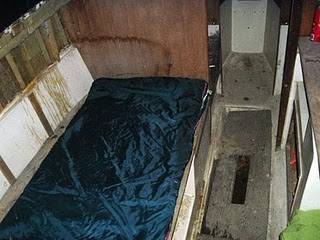 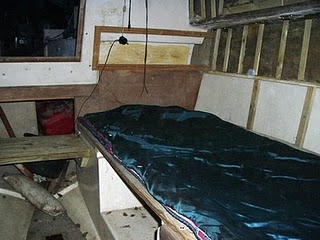 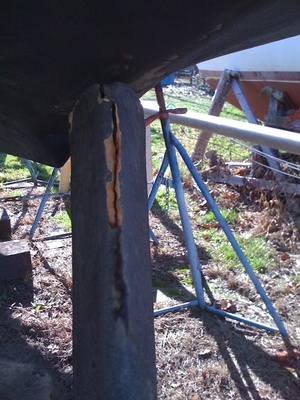 The following is a list of the projects planned for this winter (2010). More information is available on my blog by clicking here

1. Repair cockpit sole-- we've got soft spots from water leaking around the rudder post. I intend to cut the fiberglass out from underneath, remove the rotten wood, repair any cracks from below, replace removed wood with a synthetic, and re-glass the bottom. Doing the repair from below will save me from having to cut out the non-skid above, though after spending a few hours upside down in a lazarette, preserving the original non-skid may seem less important. While down there, I also plan to glass some shelves into the aft lazarettes for the fuel tank and battery. If really ambitious, I may install a base for a cockpit table forward of the rudder post.

2. Install new portlights-- when we bought the boat earlier this year, it had rotten wood panels and metal vents instead of portlights. We bolted Lexan directly to the cabin house with a butyl tape gasket and caulk seal, then painted a border on the Lexan to make it look like a portlight. These don't leak, but they also don't open and I'm worried they wouldn't withstand rough weather. This

winter I'll remove the bolts, glass over the window holes using the Lexan as a mold, remove the Lexan, fair the cabin house exterior, and then cut new holes for and install new opening portlights with screens. We found some on steep discount at a marine consignment shop.

3. Install toe-rail mounted lifeline stanchion bases-- inspired by your success, we're looking forward to having a little more room on deck. This will also entail replacing our bent stanchions, fabricating new lifelines (probably with a do-it-yourself kit), and replacing our beyond-repair bow rail. I anticipate grinding off what is left of the stanchion hole in the bow casting and installing a salvaged four-legged bow rail to the deck with large backing plates.

4. Replace the cabin roof handrails-- the raised fiberglass handrail bases are cracked, admit water, and don't seem to provide any good way of attaching a rail. I am debating between attempting (another) repair of them, or just cutting them off and glassing over the holes to install more traditional hand rails that will bolt through to a sister set of handrails inside the cabin. Either way, the current loose and leaky rails must go.

5. Refinishing the decks-- between gouges and cracks in the gel coat and the filling/fairing from the repairs above, the decks will need to be refinished. I plan to use a 2 part paint on smooth surfaces and will test that on a non-skid spot. If the texture of the non-skid does not come through the paint, I'll use kiwi grip on the non-skid.I'm already scouring the newspaper for sales on sandpaper in anticipation of this project. I will do this before cutting holes to install the new portlights.

6. Rewiring the mast-- our mastlight is not wired into the boat and there is nothing connected to the antenna at the top of the mast, though we can hear wires clanging around inside the mast. I'll replace these (and run the new ones inside a length of pipe to prevent clanging if I can figure out how to attach the pipe to the inside of the mast).

7. Refinishing the interior walls--the prior owner cut out the fiberglass liner from the interior cabin walls (though he left the ceiling). We tried covering this with wood paneling, but there was no satisfactory way to trim the paneling or meet the paneling up to the portlights, and the end result is an eye sore. As part of the portlight replacement project, I will remove the wood, re-glass and fair out the interior walls, and then install marine vinyl as a liner.

There are a couple dozen smaller projects, but that's the major projects list. We'll post pictures to the photo blog as things progress, hopefully with more project-specific photos now that we're not in "do everything" mode.